Posted 24th Jul 2019 at 4:49 AM - Updated 5th Oct 2019 at 11:13 PM by Sophie-David : Updated with Improved Routing & Movie Fix - Viewed 3834 times. Direct link to this thread
10 Comments / replies (Who?) , 10 times favourited , 50 times thanked
Tags: #holographic TV, #Holo TV, #holographic television, #two-sided TV, #double-sided TV, #fantasy TV, #sci-fi TV
Information (Click for more details): New Mesh
This is a Maxis Recolour which means that it is a recolour of an item that already exists in your game. Please check the Expansion pack requirements to see which game pack it recolours.
This is a new mesh, and means that it's a brand new self contained object that usually does not require a specific Expansion pack (although this is possible depending on the type). It may have Recolours hosted on MTS2 - check the sidebar.
This is a new mesh recolour, and means that you will need to download the particular mesh itself in order for this to show up in your game. See the Meshes Needed section or read the text for more information.
Title: Two Tile Holographic Television

1) To design a free floating "holographic" two sided television object with an image that can be viewed from either the front or the back.

2) To provide a variety of two sided static recolours for when the television is switched off.

3) As an option, to allow the Holo TV to be placed in a conventional wall mounted picture frame or within other objects such as fireplaces. 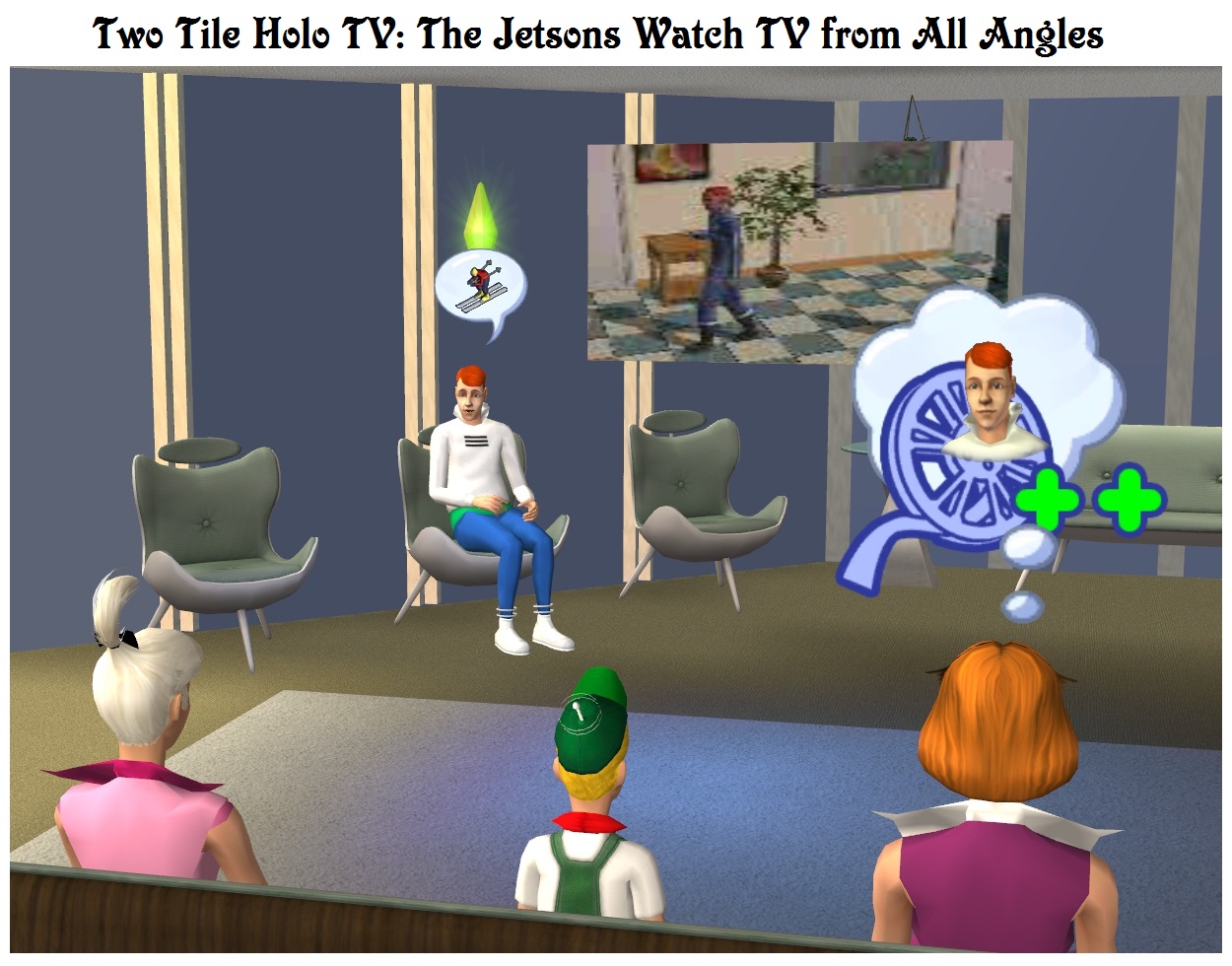 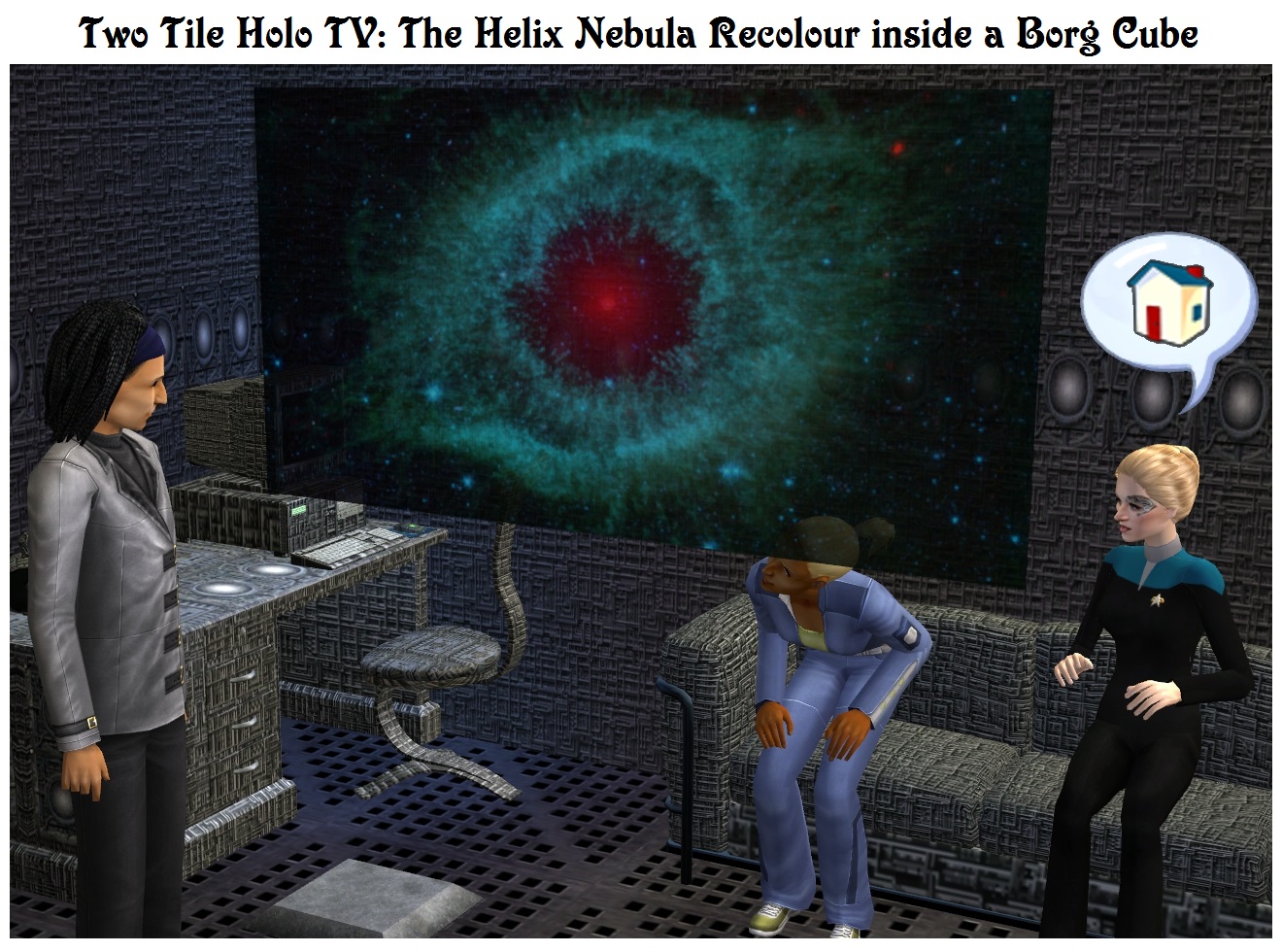 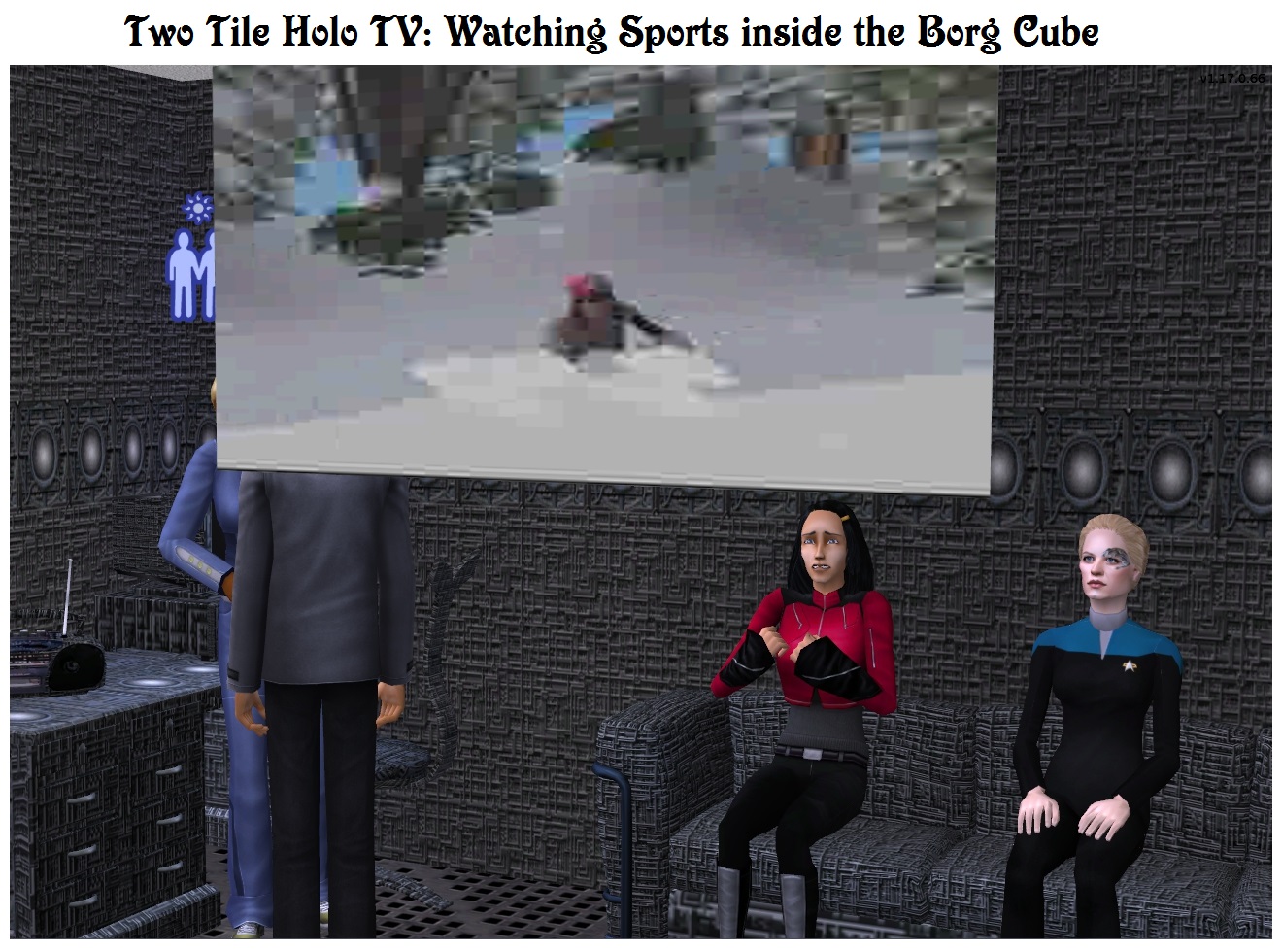 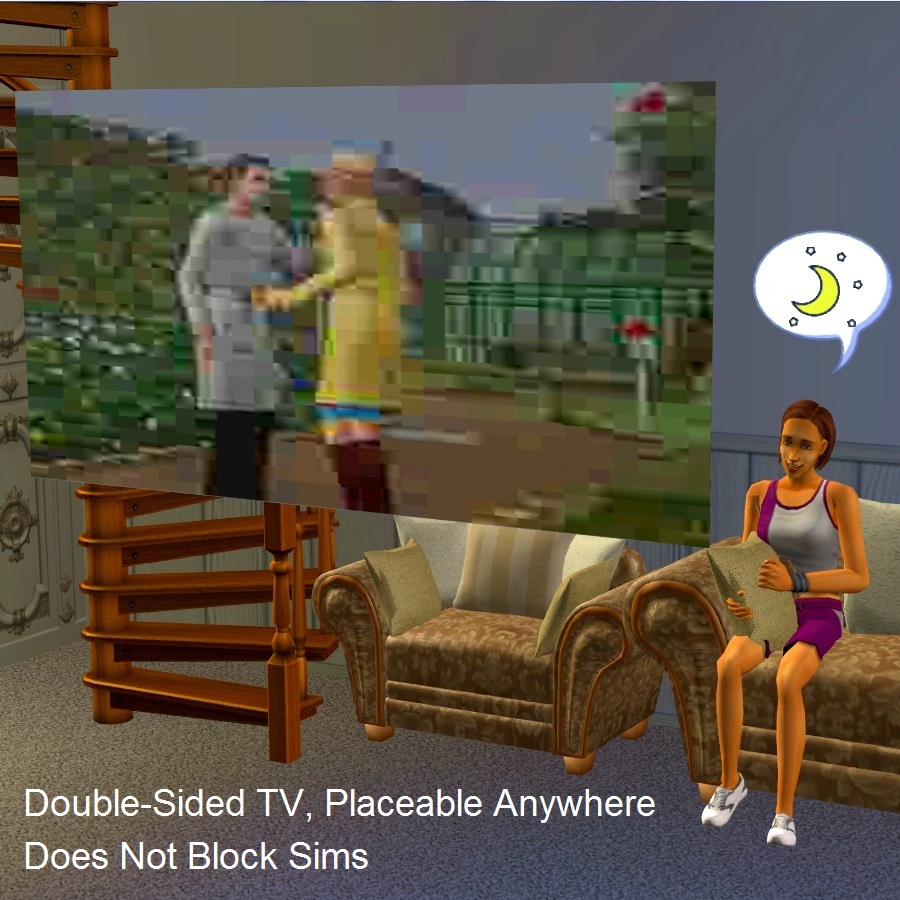 Whether high technology or high magic, this holo TV imagery can be placed almost anywhere, without interfering with other objects or the movement of Sims. By default the two sided video projection will occur in midair, but it can also be framed within conventional wall decor - such as the basegame "In the Beginning", Oil "Fantasy Scape" and "SimCity at Night", the Holiday Stuff "Holiday in Leukerbad" and Seasons "A Home for All Seasons" ("MoveObjects On" is not required). 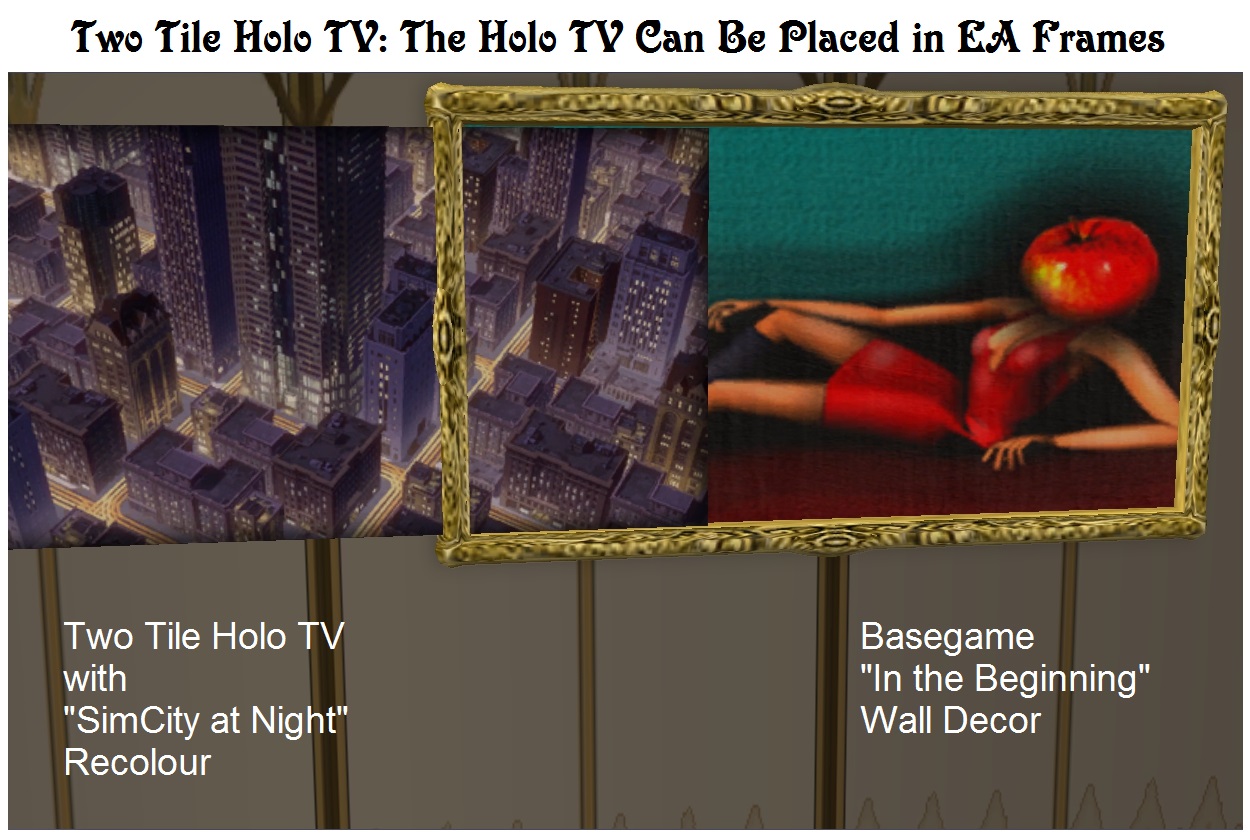 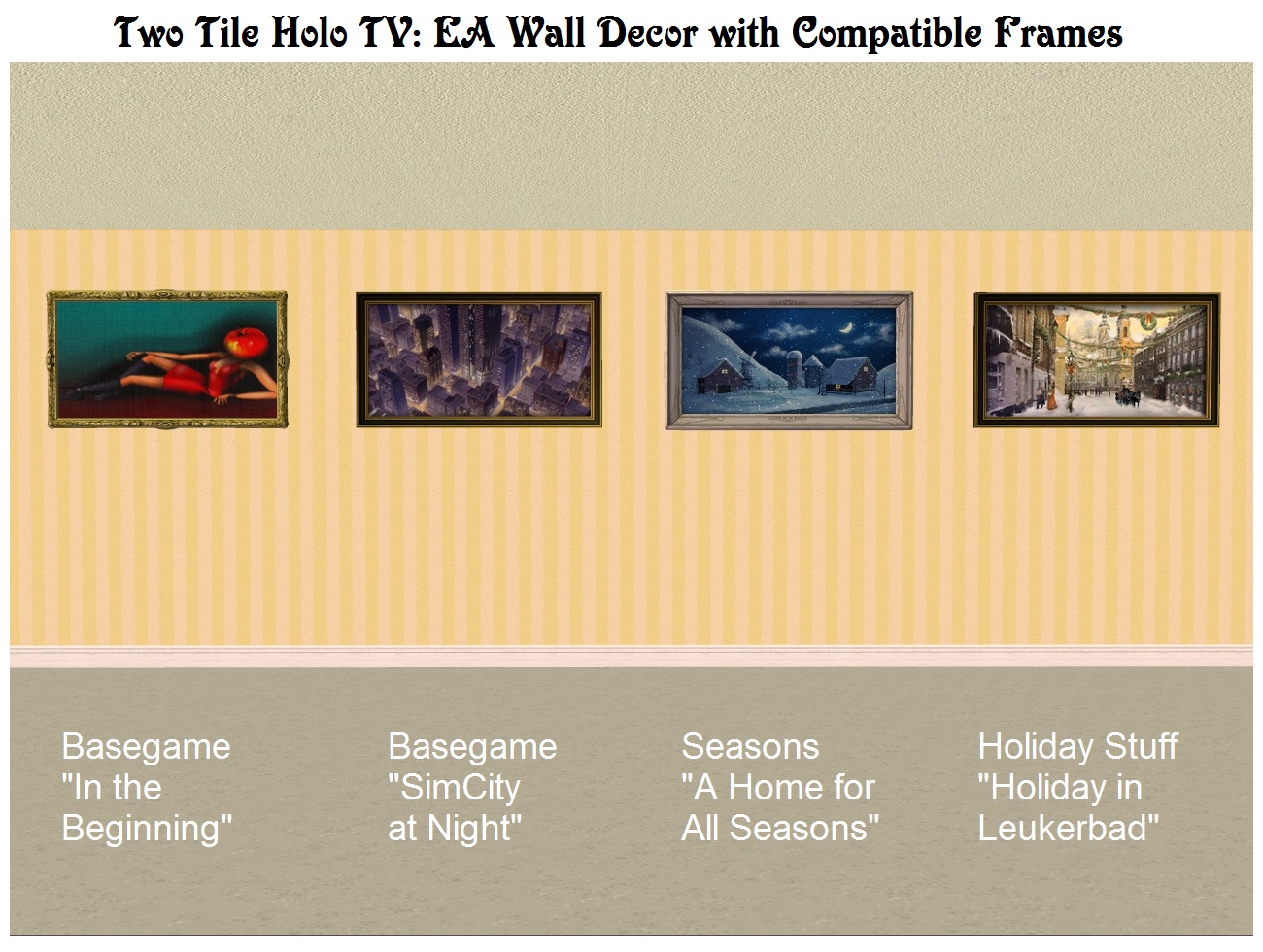 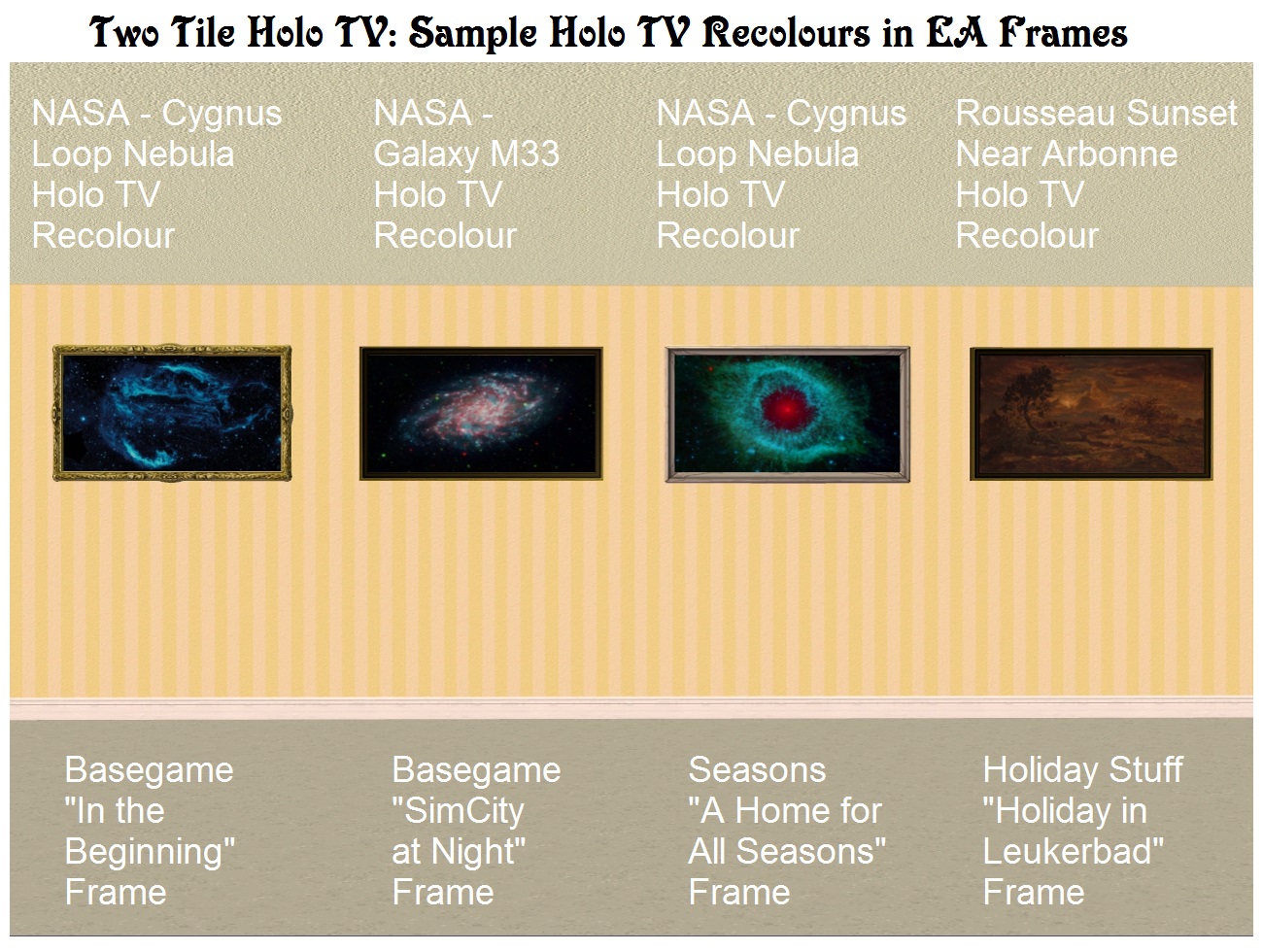 While remaining basegame compatible, the Holo TV supports the television functions of all expansion packs except those involving pets. (In order to maintain basegame compatibility, pets cannot interact with the Holographic Television Picture - but the object is otherwise fully compatible with the Pets EP.)

For times when autonomous television use becomes annoying, the player can be "Disable Autonomy". 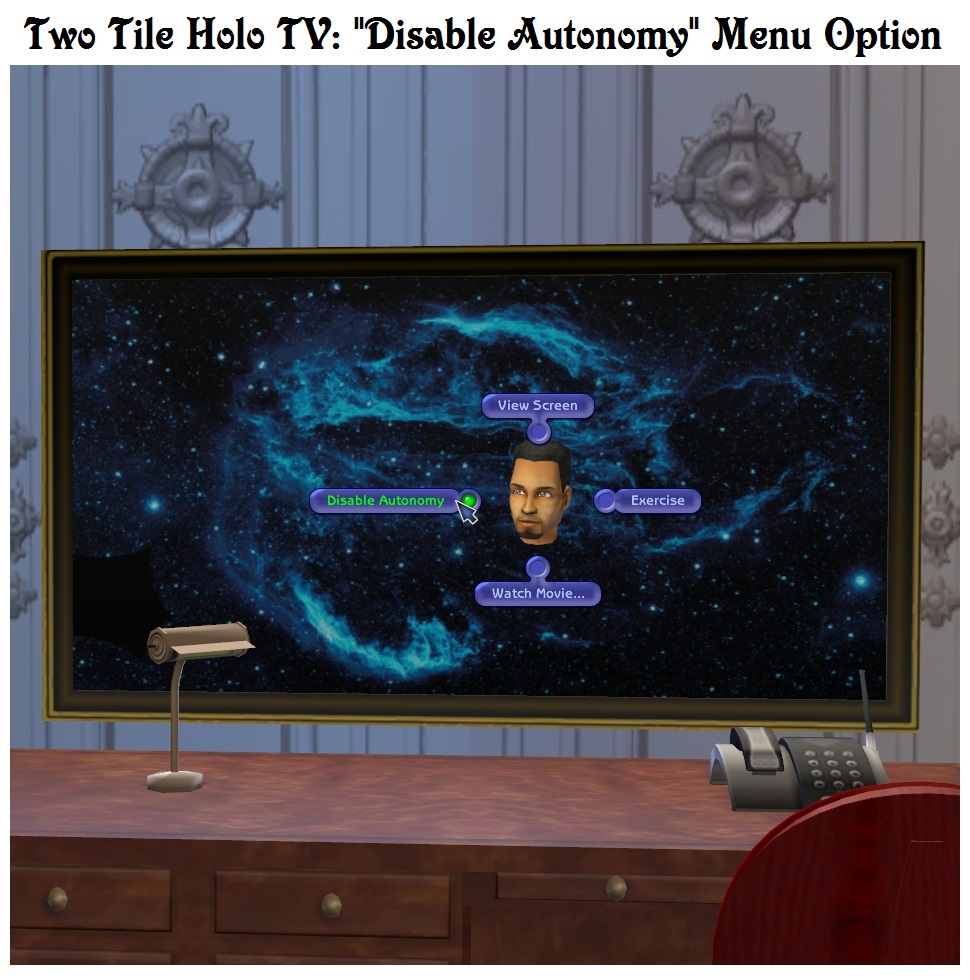 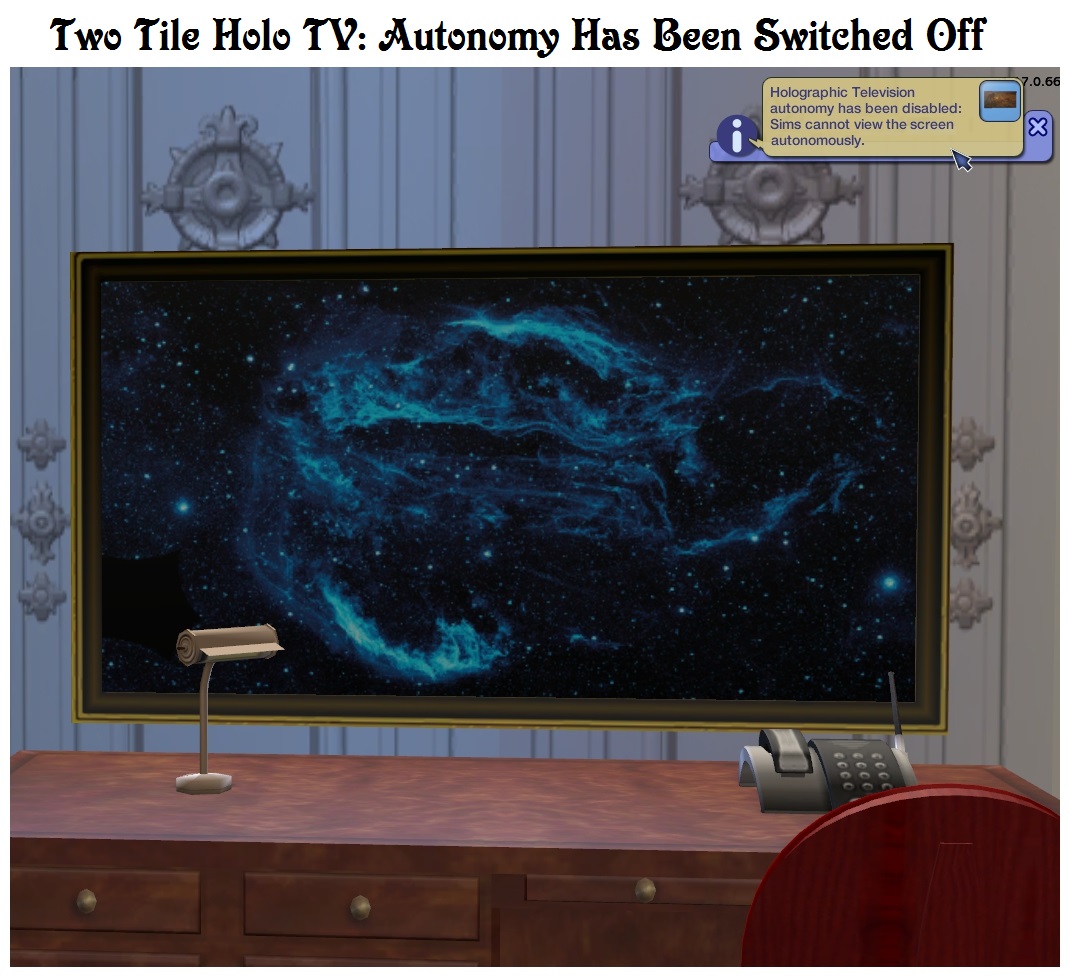 This magical object does not depreciate, it is Apartment Life/M&G height adjustable, and it is also immune to fire, lightning, repossession, snow and theft. A limitation is that when switching off the television, you may momentarily see a blank glass screen, before the default picture is restored. Apart from being unbreakable and untinkerable, the Holo TV supports all television functions, including operation of the basegame video game machine.

The Holographic Television package contains an invisible screen recolour, and if this invisible recolour is placed within a conventional picture frame, the underlying picture will be revealed when the television goes off. The invisible recolour is also useful for when the Holo TV is placed in a fireplace (use "Boolprop SnapObjectsToGrid Off", "MoveObjects On", and AL/MG height adjust or an OMSP to do so). 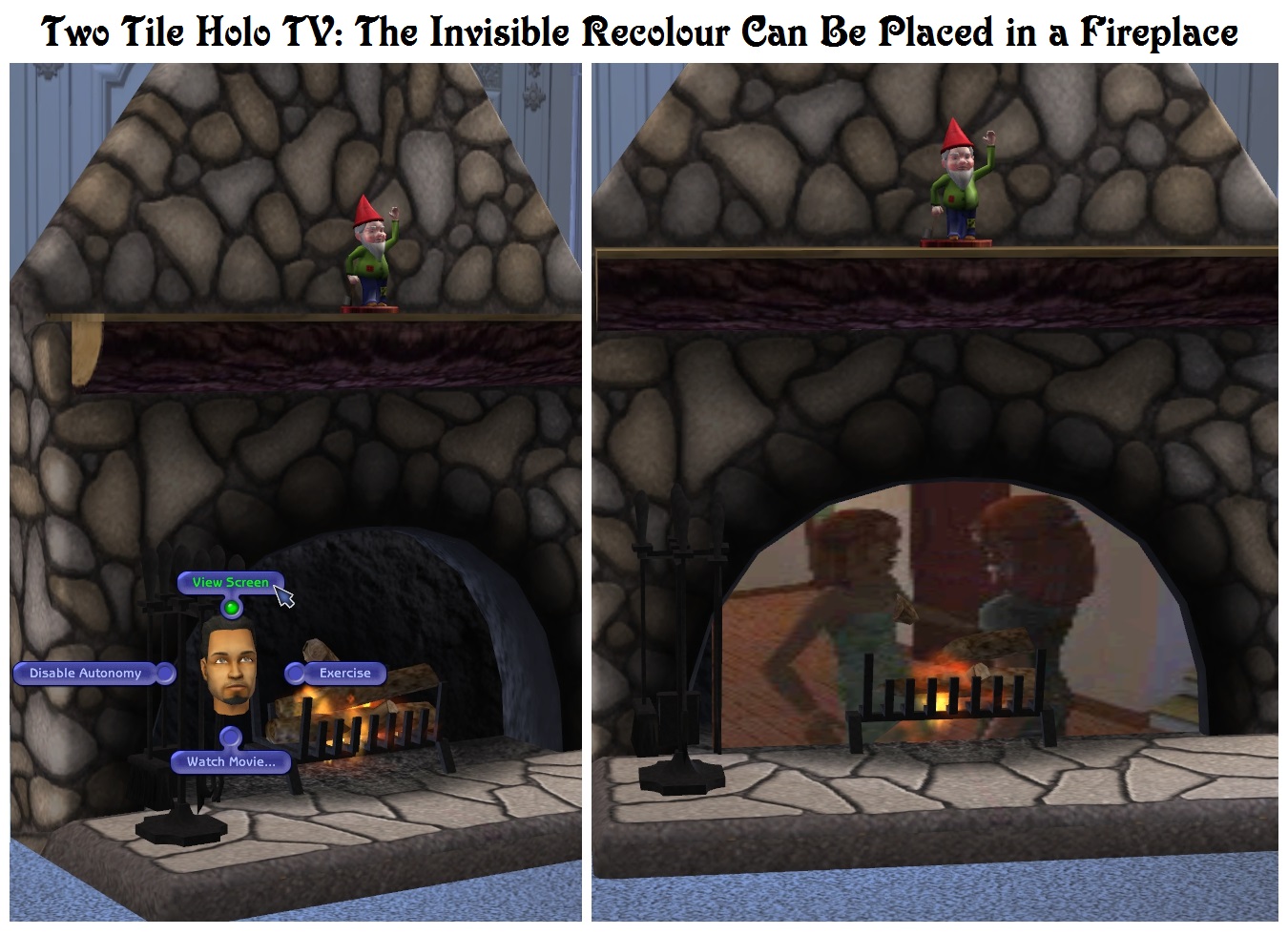 1) Holographic Television - The Holo TV costs 7900 Simoleons and can be found in the television section of the catalogue. It has a Fun rating of 10 and a Room (Environment) rating of 10.

The "Home for All Seasons" textures require Seasons or any later EP. 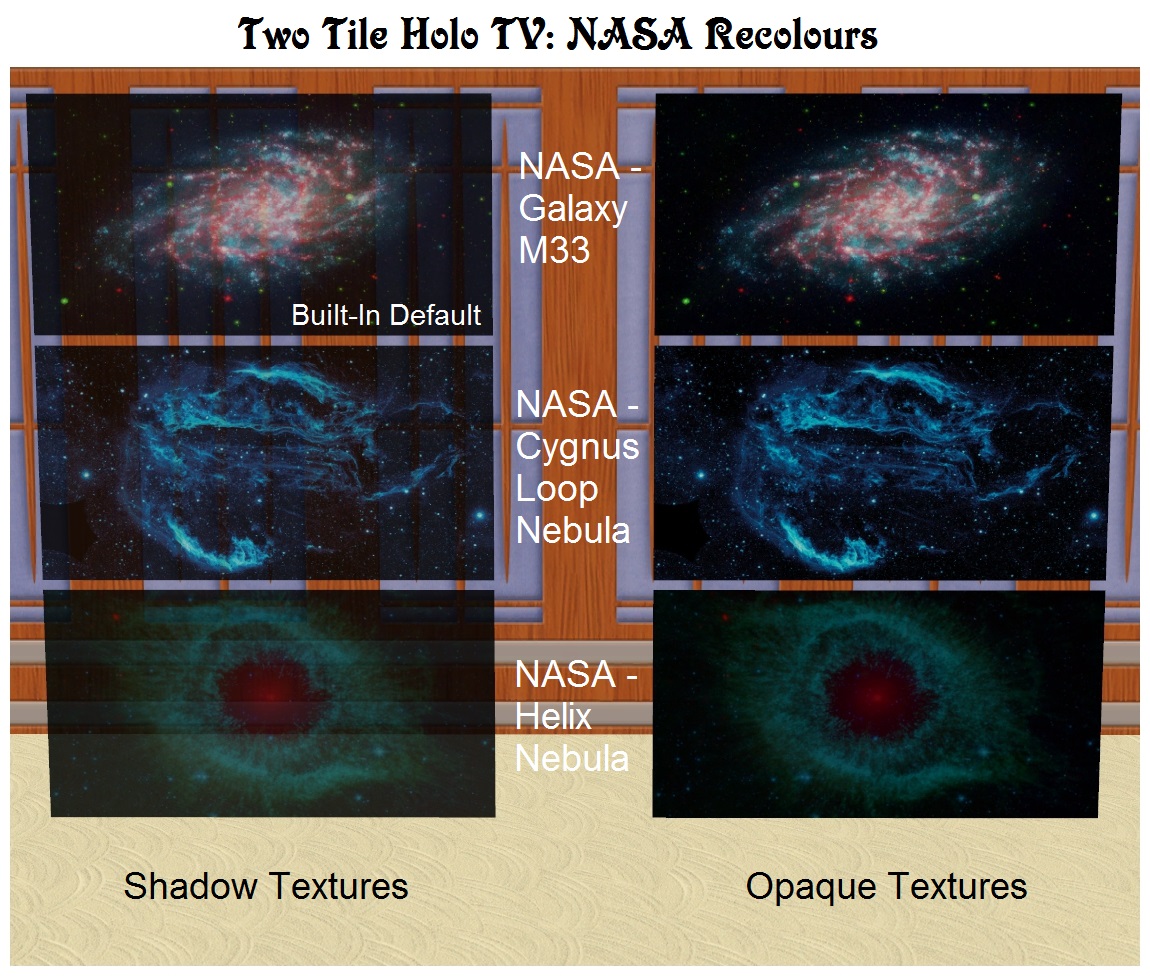 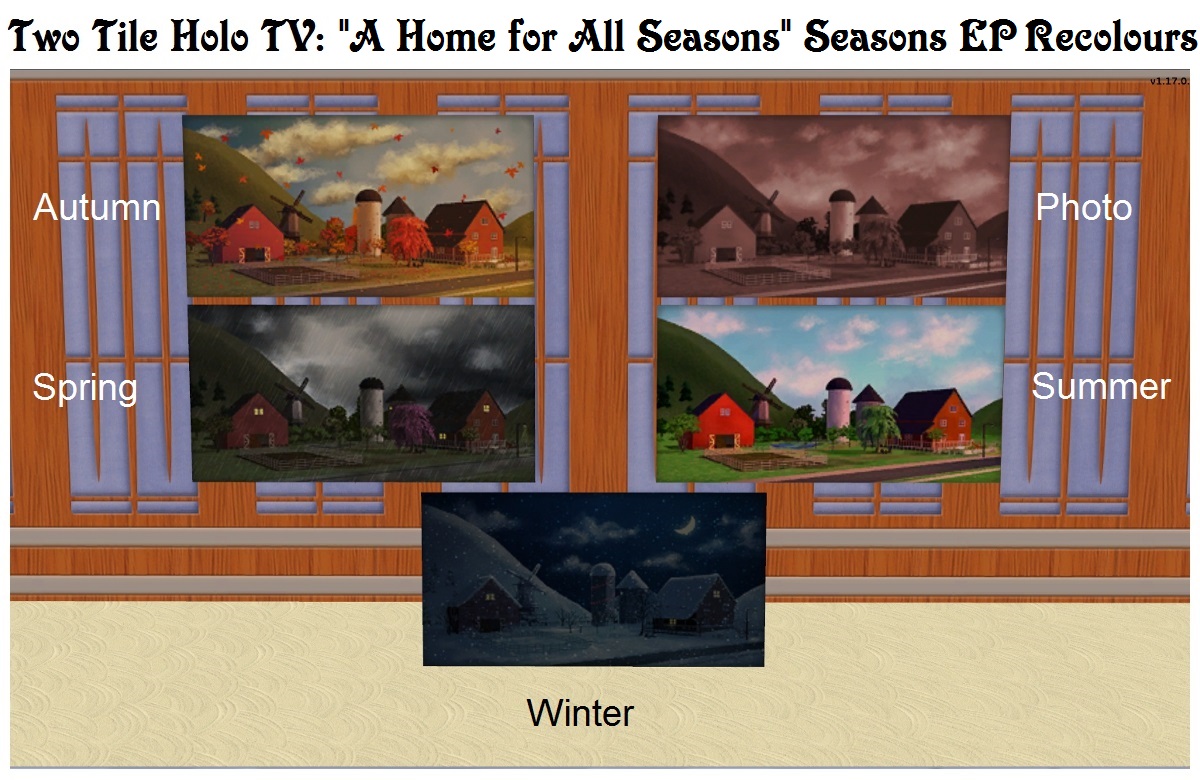 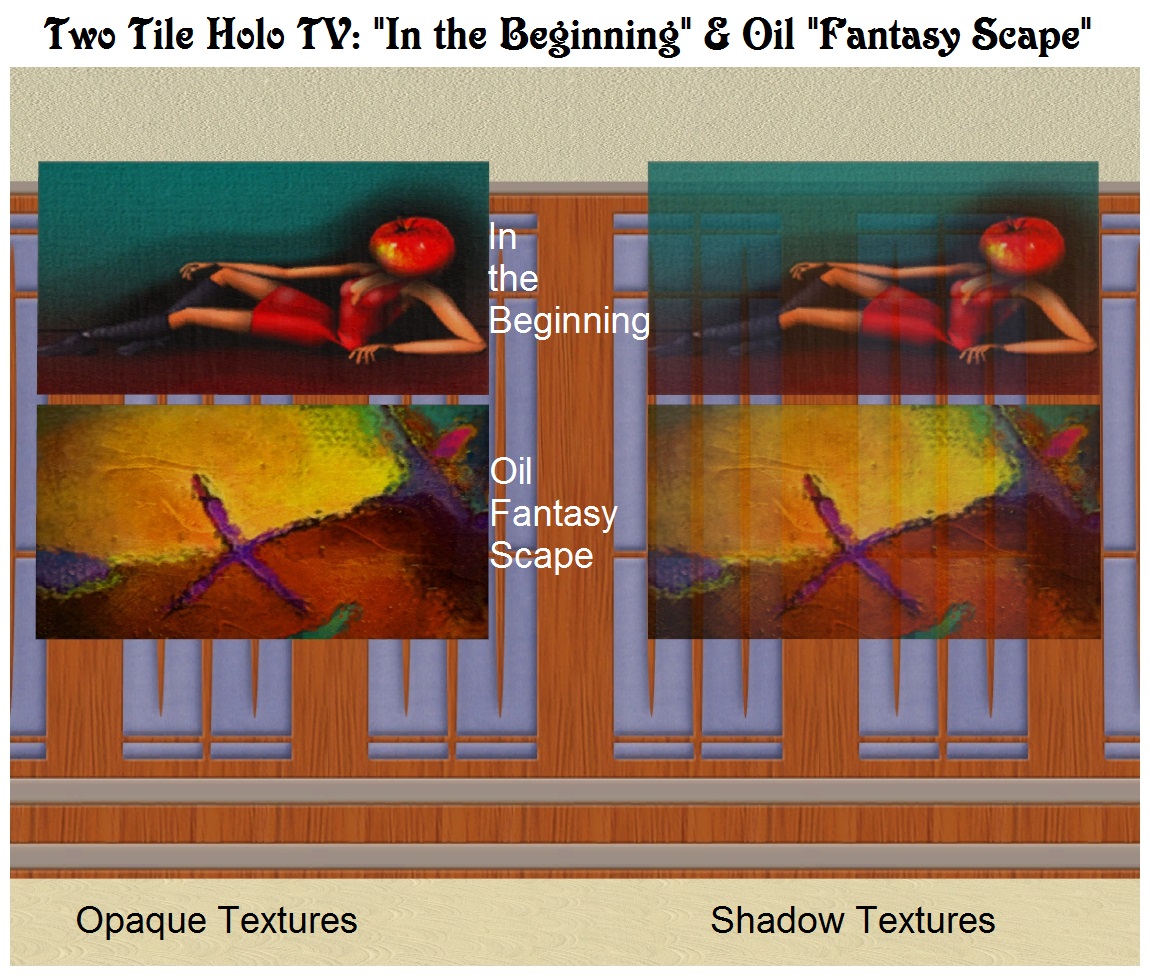 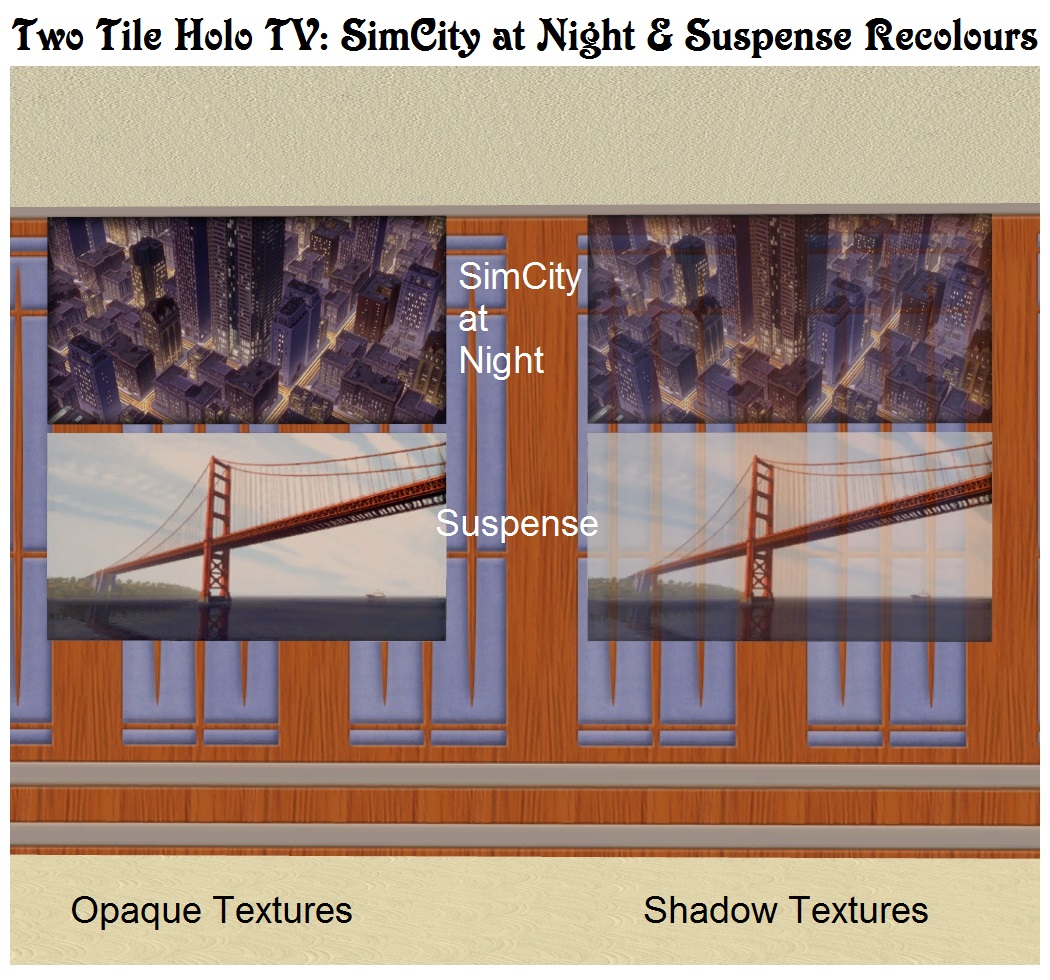 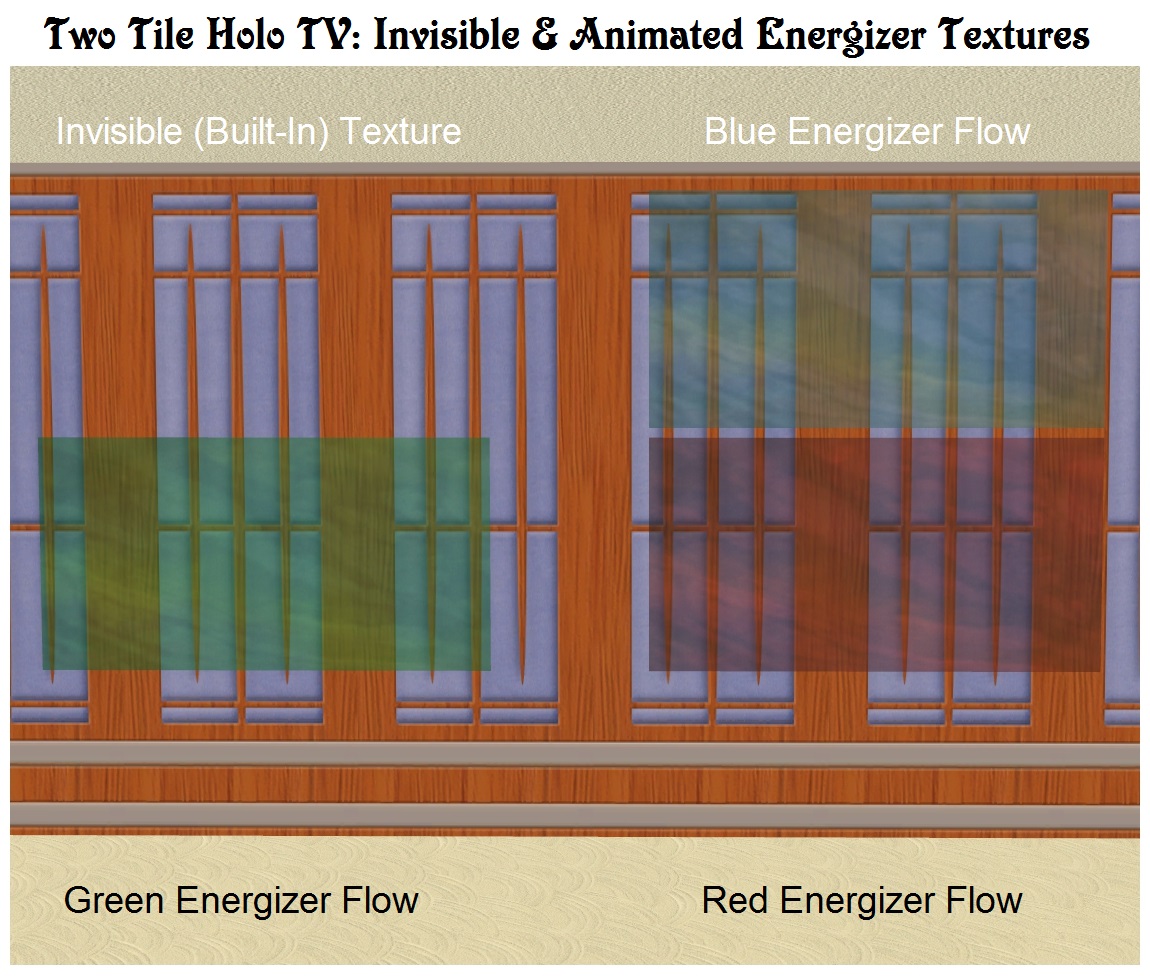 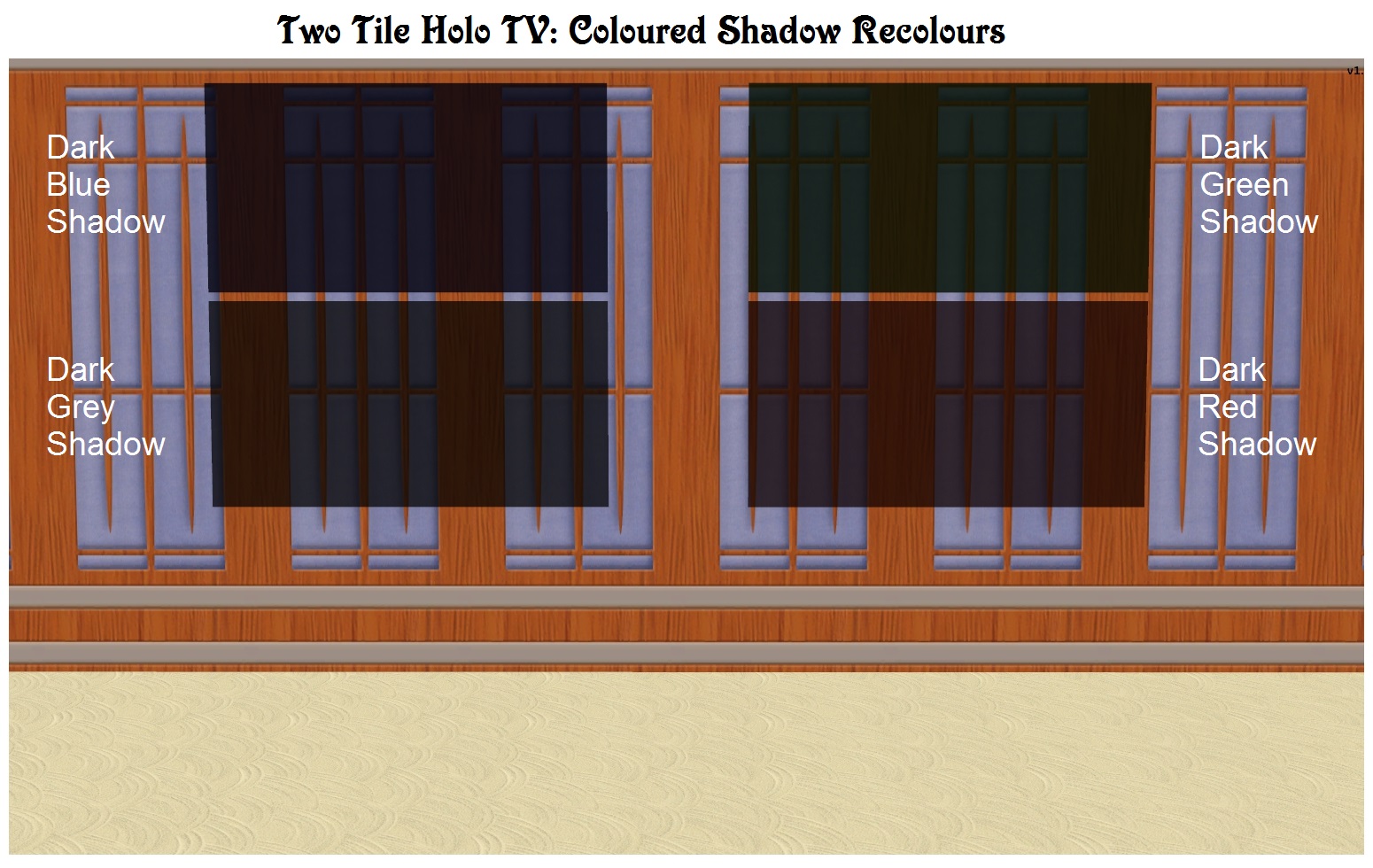 Unlike the televisions that come with the game, the Holo TV screen is viewable from either the front or the back. To enable two sided viewing, the Holo TV contains custom routing code, which also allowed me to make the following tweaks to EA's standard routing protocol:

5) If there is only one seat in the room and that seat is occupied, all other Sims will stand to watch the screen. This allows for the Holo TV to simulate being placed at an operational console with a Sim sitting at it. 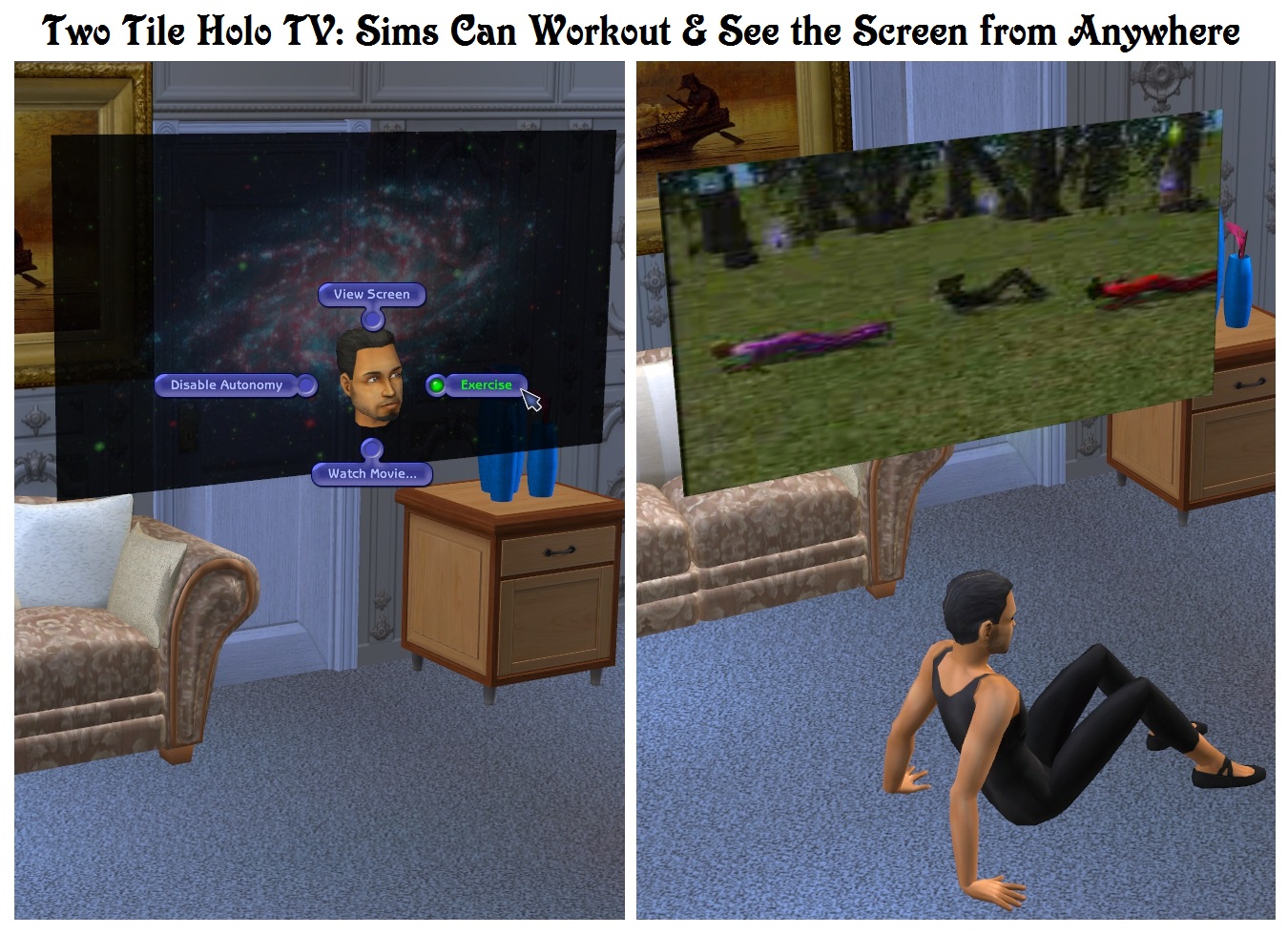 The aspect ratio for the Holographic Television screen is 1.92, slightly wider than the basegame "Soma 'Wall-Eye' Large Screen Flat-Panel Television". The default recolour size for the "screen" or picture subset of the Holo TV 256x512 pixels. When configuring your source texture, I suggest first scaling its width to 512 pixels wide by 267 pixels high. Then scale the height down to 256 pixels, while ensuring that "Maintain Aspect Ratio" option (or equivalent) is disabled. This will ensure that the picture will look undistorted when displayed in The Sims 2.

- the coloured shadow textures were created by me.

- the remaining textures use or are adapted from EA's The Sims 2.

50 people have said thanks to Sophie-David for this download.