Posted 28th Nov 2007 at 9:13 AM - Updated 2nd Oct 2019 at 5:20 AM by Sophie-David : Sept. 2019 Update - Viewed 48733 times. Direct link to this thread
49 Comments / replies (Who?) , 58 times favourited , 742 times thanked
Tags: #Lady of Shalott, #enchanted, #painting, #magic picture, #medieval, #television, #TV, #Victorian, #Pre-Raphaelite
Information (Click for more details): New Mesh
This is a Maxis Recolour which means that it is a recolour of an item that already exists in your game. Please check the Expansion pack requirements to see which game pack it recolours.
This is a new mesh, and means that it's a brand new self contained object that usually does not require a specific Expansion pack (although this is possible depending on the type). It may have Recolours hosted on MTS2 - check the sidebar.
This is a new mesh recolour, and means that you will need to download the particular mesh itself in order for this to show up in your game. See the Meshes Needed section or read the text for more information.

This download is part of the Fairytale Creator Challenge

The previous release did not permit movie viewing unless Apartment Life or Mansion & Garden was installed. This minor update allows Sim movies to be viewed if FreeTime or any later EP is available.

2) The object uses more accurate and efficient meshing, with a 15% lower poly count.

3) Texturing is also improved, particularly for the default frame.

4) The Enchanted Picture includes two built-in invisible recolours, allowing it to be placed inside the basegame "SimCity at Night" painting, or other similarly sized artwork.

5) For times when autonomous television use becomes annoying, The Lady of Shalott can be "Disenchanted" to disable autonomy. By default, the Enchanted Picture is "Enchanted", which allows Sims to use the television without being told to do so.

If you are updating from the original 2007 release, please overwrite your "SDshalott_Lady_Mesh.package" with the file from the new download. The original non-metallic frame recolour, "SDshalott_FrameNR.package", should be deleted and replaced with "sdShalott_frame_OdalisqueGoldNR.package". 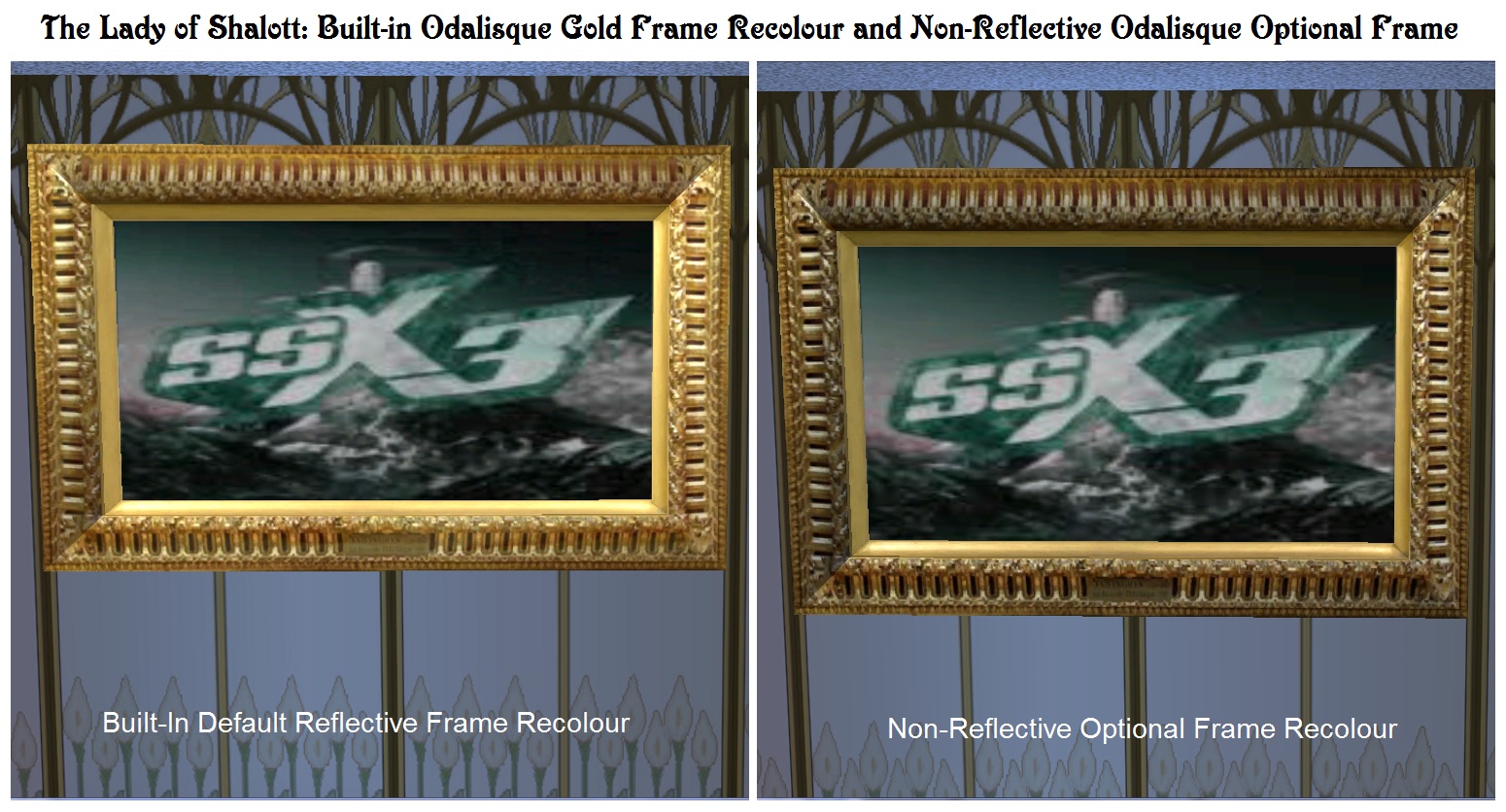 The mirror having worked its deadly curse on Elaine, "the fairy Lady of Shalott", Morgan Le Fay has repaired the glass and obsured its magic surface with a beautiful painting of the Lady herself. With care, you may again invoke its magic, so that "shadows of the world appear - winding down to Camelot". But beware you look not overly long into the "mirror clear" or you too may find "the mirror crack'd from side to side"...

- Poetic quotations from Alfred, Lord Tennyson's "The Lady of Shalott" (1842).

Seemingly a mild mannered painting of The Lady of Shalott by Arthur Hughes (1873), when the proper spells are cast this picture becomes a magical portal onto the world... 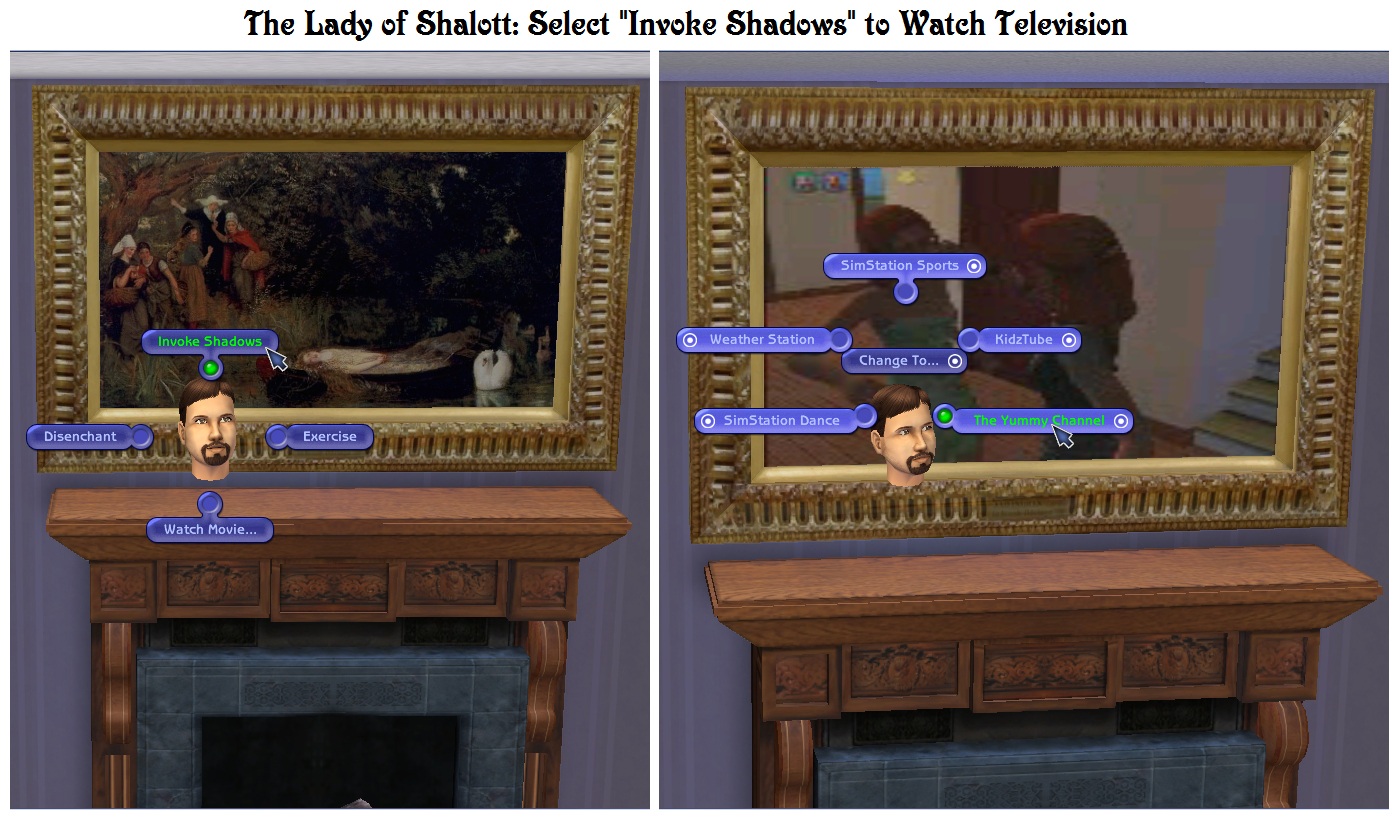 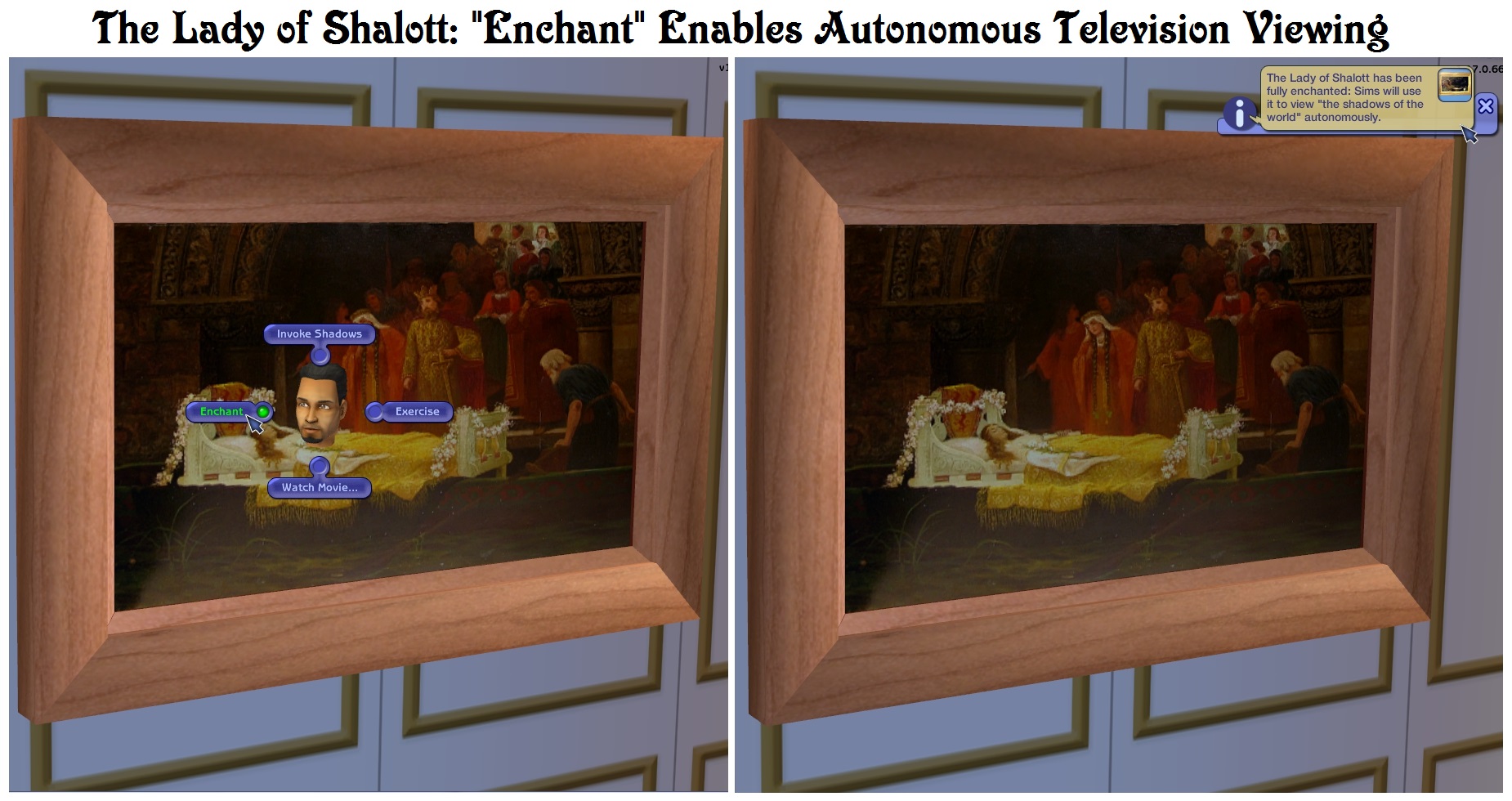 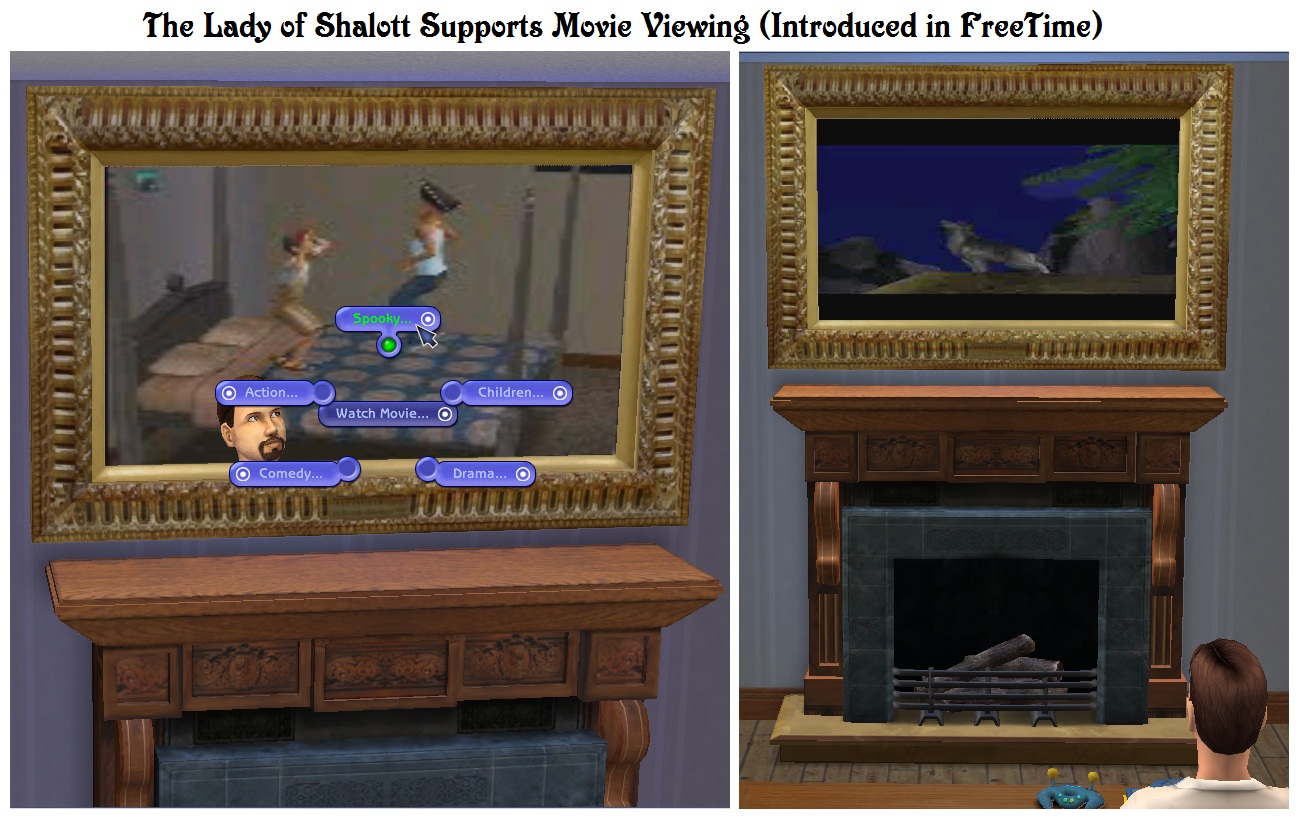 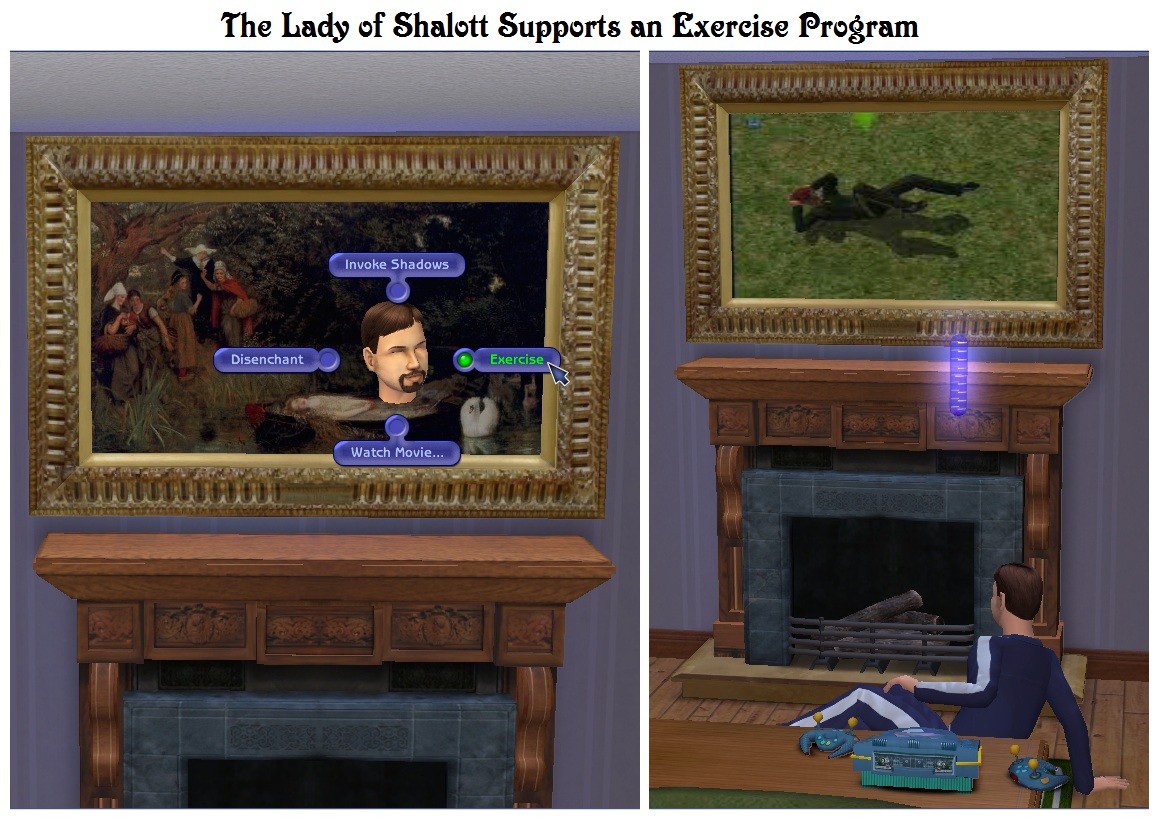 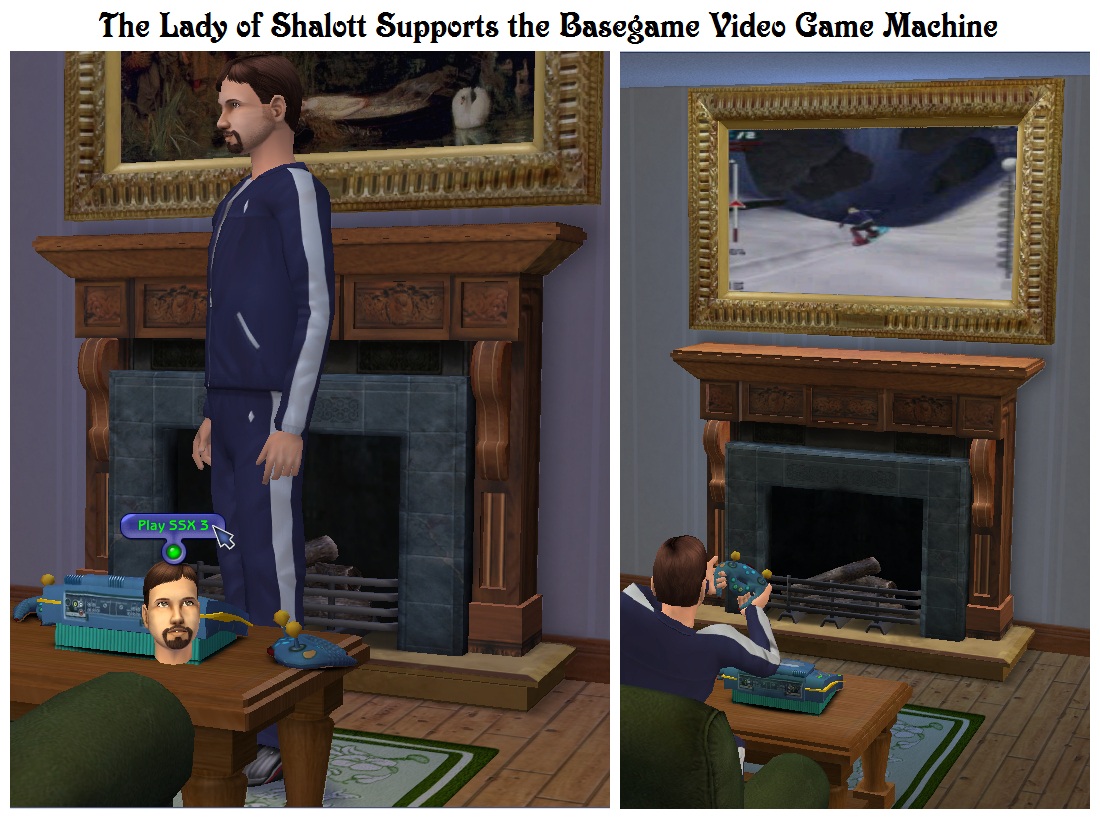 The Lady of Shalott is a nineteenth century romantic period oil painting that functions as a high-end wall mounted television. This magical object does not depreciate, it is Apartment Life/M&G height adjustable, and it is also immune to fire, lightning, repossession, snow and theft. A limitation is that when switching off the set, you may momentarily see a blank glass screen, before the picture of Elaine is restored. Apart from being unbreakable and untinkerable, the Enchanted Picture supports all television functions, including operation of the basegame video game machine.

The Lady of Shalott package contains an invisible frame recolour, allowing the screen to be placed within other picture frames, such as the basegame "SimCity at Night" wall decor (and "MoveObjects On" is not required). The package also contains an invisible screen recolour, so that when the television is "Off" it can reveal a different static picture - for example the "SimCity at Night" image.

Elaine's Enchanted Picture costs §8050 and can be found in the television section of the catalogue. It has a Fun rating of 10 and a Room (Environment) rating of 10. 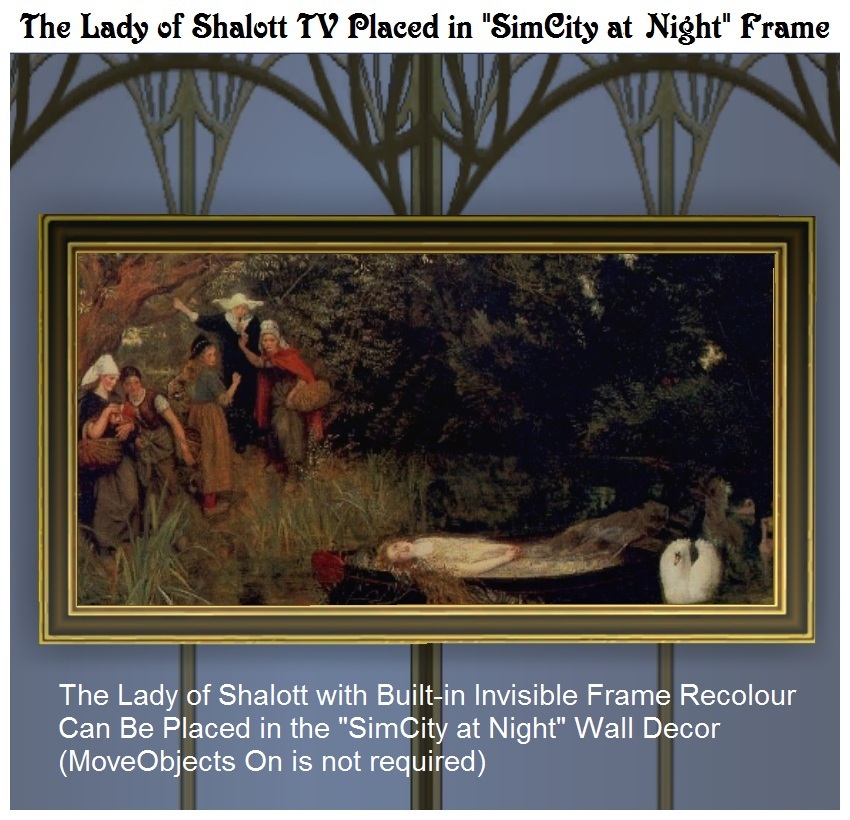 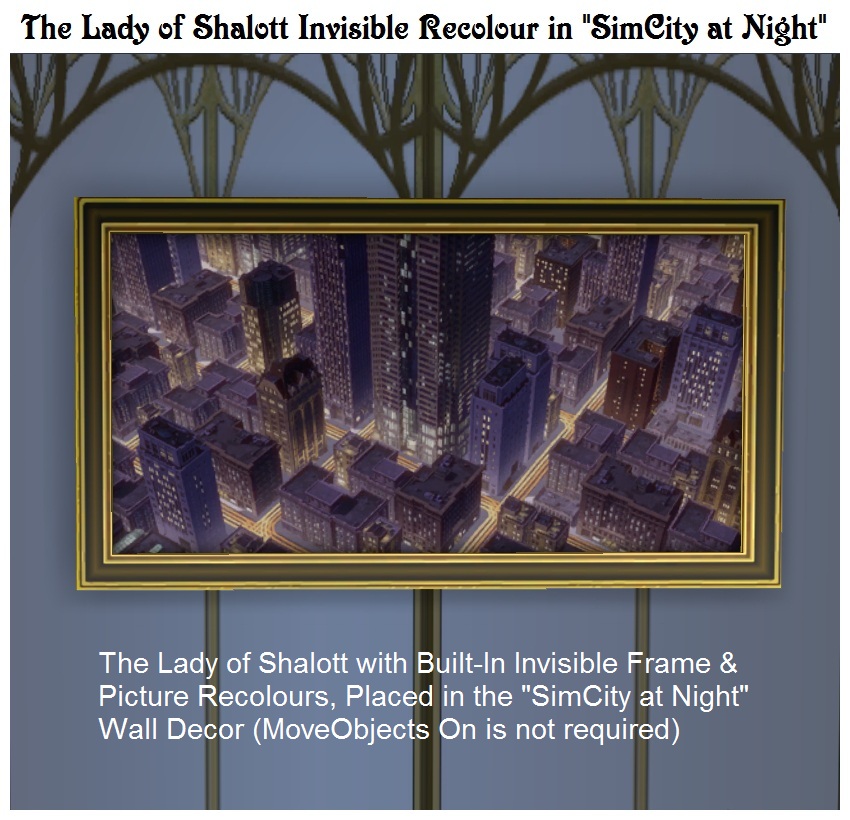 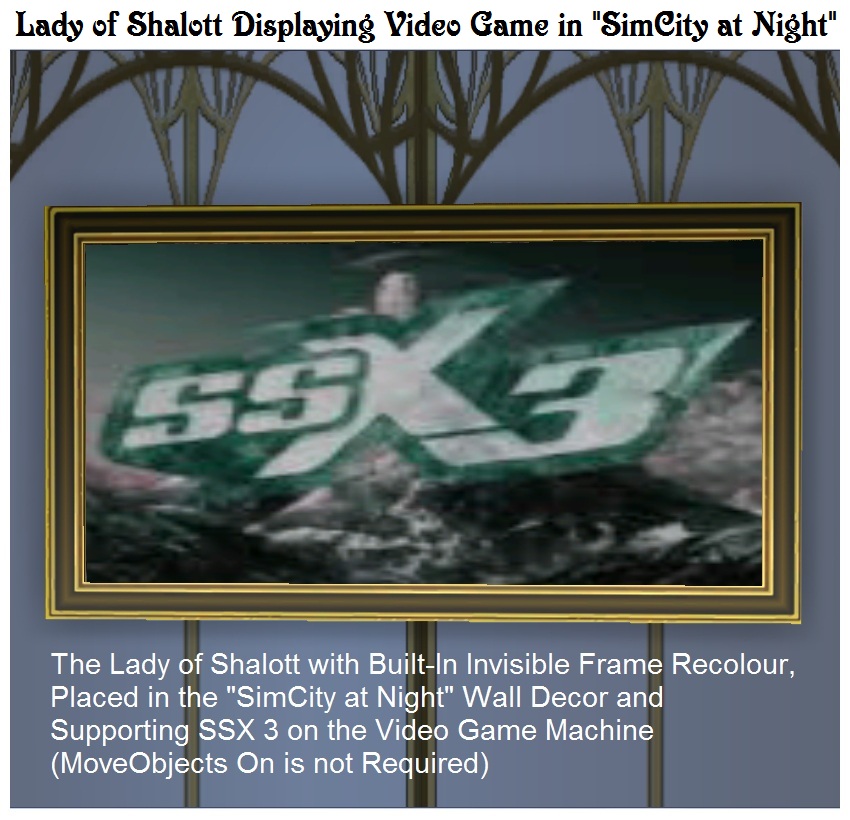 The aspect ratio for the Lady of Shalott television screen is 1.80, the same as the basegame "Soma 'Wall-Eye' Large Screen Flat-Panel Television". The default recolour size for the "screen" or picture subset of the Lady of Shalott is 256x512 pixels. When configuring your source texture, I suggest first scaling its width to 512 pixels wide by 284 pixels high. Then scale the height down to 256 pixels, while ensuring that "Maintain Aspect Ratio" option (or equivalent) is disabled. This will ensure that the picture will look undistorted when displayed in The Sims 2.

The frame is also recolourable. The built-in default frame includes metallic reflections, and the included recolour is a non-reflective version of the same frame. This beautiful frame is an authentic 3D conversion of the one containing La Grande Odalisque by Jean-Auguste-Dominique Ingres, currently hanging in the Louvre. For the sides and front edges, the Odalisque frame is supplemented by textures from Young Women of Sparta by Jean-Baptiste-Camille Corot. The back of the picture frame is adapted from the back of the basegame "In the Beginning" painting. 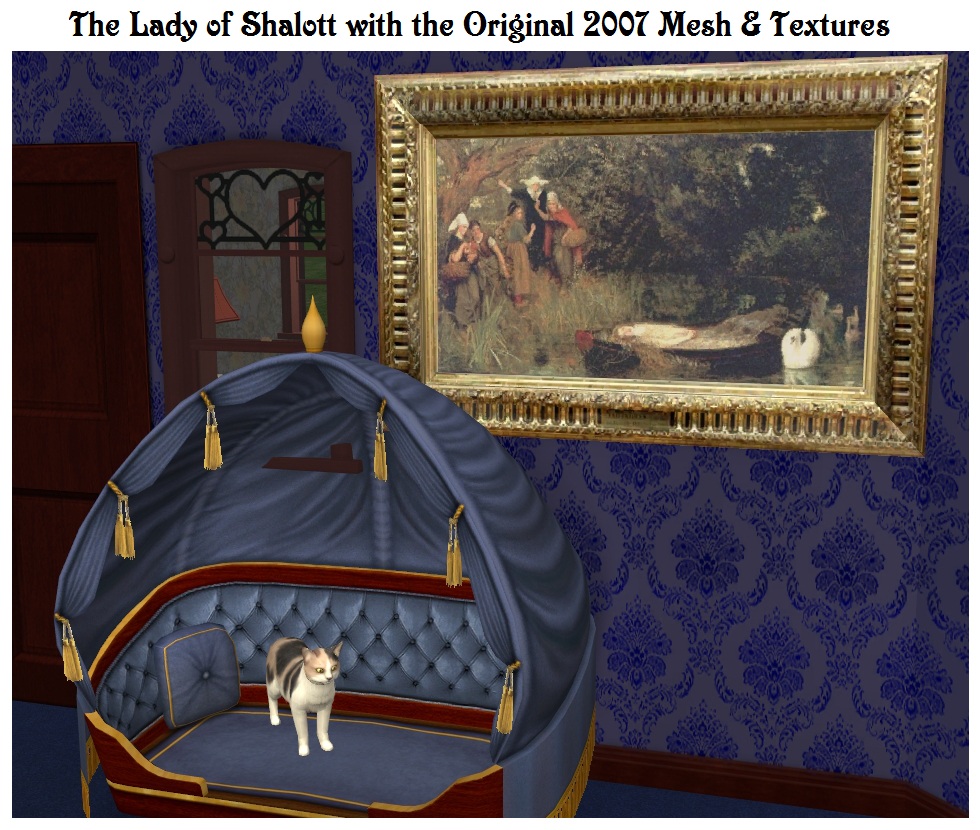 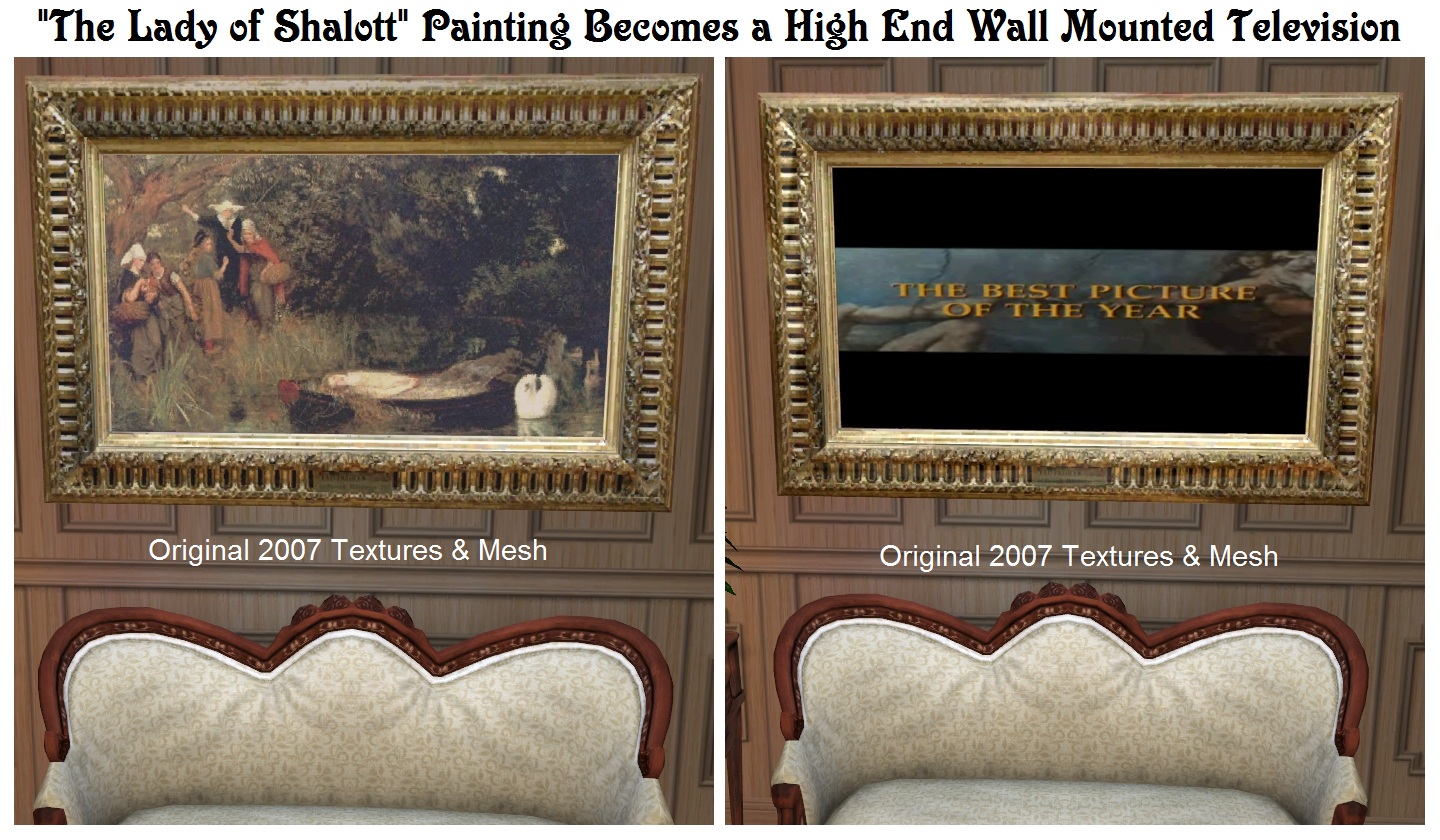 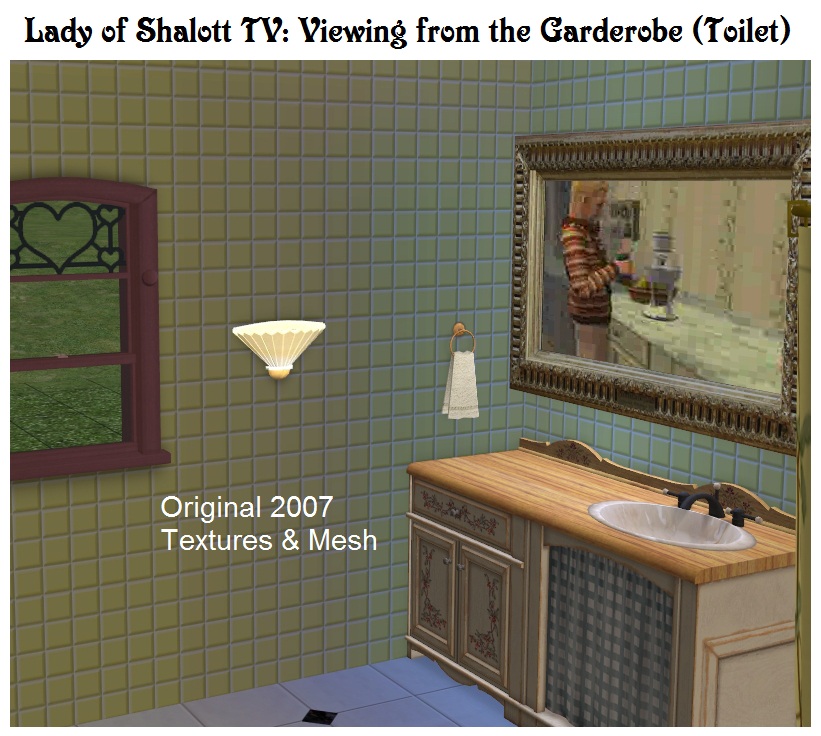 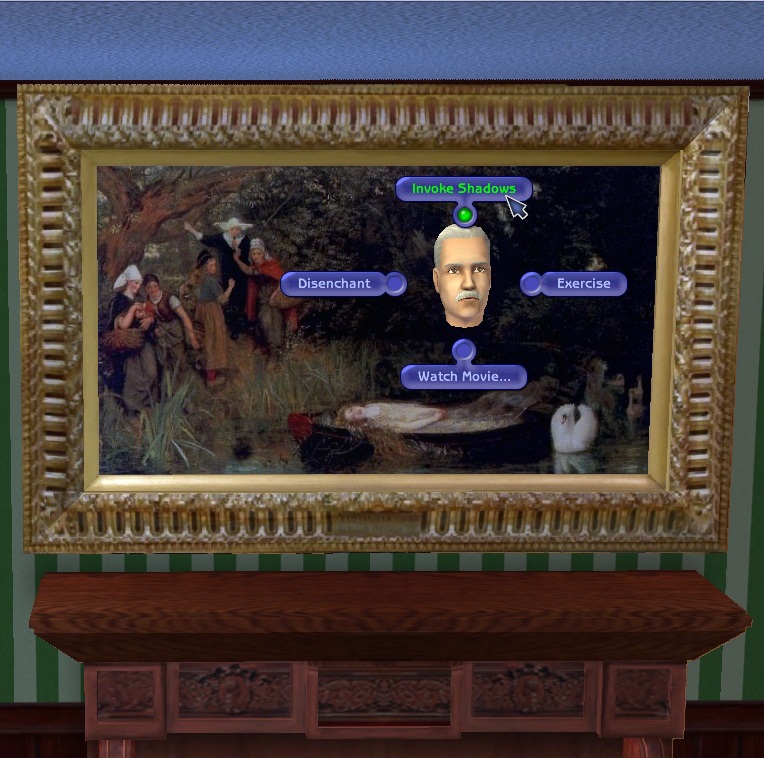 Mihura was kind enough to translate the picture's story and custom menus into French, German, Italian and Spanish.

- Arthur Hughes artwork is in the public domain, available at the Wikimedia Commons: The Lady of Shalott,

- the textures for the picture frame are also from Wikimedia Commons: a combination of the frames for La Grande Odalisque and the Young Women of Sparta.

742 people have said thanks to Sophie-David for this download.